The James Webb Space Telescope: Testing on the ground to ensure on-orbit performance

The James Webb Space Telescope is the largest, most complex telescope being launched to date. It includes segmented folded mirrors and a folded sunshield deploying on orbit and instruments with state of the art infrared detectors and different science capabilities operating below 45K (-378 F). A rigorous test campaign including ambient and cryogenic tests to verify the health, performance and operations readiness in the conditions it will see on orbit is near its completion.

A summary of some of those tests and their challenges as all the observatory components get assembled will be presented, covering in particular the comprehensive program of thermal, optical, electrical and operational tests in the cryogenic chambers at Goddard Space Flight Center and Johnson Space Center. How the telescope achieves the pointing stability required for science operations by using the various components of its Fine Guidance System, the alignment of the telescope mirrors and observation innovations on the science instruments will be covered. 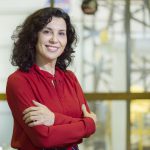 Dr. Begoña Vila is the lead Systems Engineer at NASA’s Goddard Space Flight Center/SGT for two of the instruments on the James Webb Space Telescope (JWST), one of them the Fine Guidance Sensor responsible for the pointing and stability of the Observatory. She obtained her PhD in Astrophysics at Jodrell Bank, Manchester University, UK after her undergraduate degree in Spain. Her research included rotation curves of galaxies, nuclear galactic activity and stellar abundances observing both in optical and in radio wavelengths. She has been involved with JWST since 2006 starting in Canada under the Canadian Space Agency and moving to NASA after the flight instruments were delivered in 2012. She was the overall test lead for the final cryogenic test at Goddard for all the JWST instruments and was heavily involved in the testing completed at the Johnson Space Center cryogenic chamber that included the JWST instruments and mirrors. She is currently working on the test planning at the Observatory level at NGAS, and the detailed plans for commissioning and operating the instruments following the launch in 2021.

She has received various achievement awards including the NASA Exceptional Public Achievement Medal in 2016 and the Premio Wonenburger by the Xunta de Galicia (Spain) in 2017.

Apart from her work, Dr. Begoña Vila enjoys outreach activities communicating with the general public on JWST, STEM or other, both in English and in Spanish.