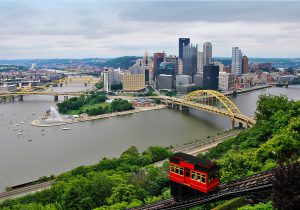 The popular Business Forum returns to the Annual Meeting this year with a theme of Market Discovery, and an overall goal of helping attendees to accelerate the creation of new businesses around precision engineering technologies. The discussions, led by successful entrepreneurs and accomplished business leaders, will provide information and guidance for individuals interested in pursuing new business opportunities either as a startup or from within existing organizations.

Central to the discussions will be the pivotal importance of Market Discovery. Attendees should recognize that finding market opportunities is as important, and perhaps more important, than finding technical solutions. Everyone should be keenly aware that technical achievements should support these market opportunities. Attendees will have the opportunity to make new contacts within the Precision Engineering community with those of similar interests. It is the goal that everyone will be encouraged to move ahead to define next steps for themselves and to pursue their business goals.

The forum will be held in the morning on Tuesday October 29, and includes light refreshments and an in-room lunch to encourage networking through individual and group discussions.

Rich Oprison is a fractional CMO, a role which allows him to serve as a temporary or transitional CMO for companies with an acute need for executive level marketing assistance.  During his engagements with clients, Rich helps amplify the impact of their marketing function to drive company growth. His 20+ years of global marketing leadership experience within small and large, complex marketing structures in many different industries supports his ability to determine, without bias, the optimal combination of marketing initiatives needed for each business with which he works.  His prior roles include VP Strategic Services for Brunner Advertising, VP of Marketing for EDMC, SVP of Marketing for GNC, VP of Global Marketing and Customer Experience for Thermo Fisher Scientific, and CMO and Head of Employee Engagement for ServiceLink.

Throughout his career Rich has transformed marketing organizations from sales, support and creative functions to true drivers of revenue growth. He draws from his broad experiences to resolve difficult strategy, talent, technology, process and marketing effectiveness challenges.  He has helped businesses navigate “digital disruption”, improve customer experience, and leverage technology to drive marketing and sales effectiveness and synergies.

Across a variety of industries, Rich drives accountability and performance in product and service launch planning and implementation, e-business, e-commerce, digital marketing, digital content strategy, and is well versed in the emerging field of account-based marketing and selling. He is also an established expert on how to use marketing strategy principles to develop your “employer brand” as a competitive advantage to attract and retain the best talent and become an employer-of-choice in your industry and community.

Robert Smythe is president of Äpre Instruments. Previously, Robert held the positions of Vice President of Engineering and then Vice President of Marketing and Sales at Zygo Corporation. He has been a marketing consultant to several precision engineering companies, as well as to ASPE itself.

With more than 30 years of experience designing, developing, applying and marketing precision instrumentation, Robert brings a unique perspective regarding how to market precision technology products.

Robert is a founding member of ASPE and has served on the Board of Directors of ASPE. He holds a BS in Astrophysics with Graduate studies in Electrical Engineering and is a Senior member of SPIE and a member of OSA.

Don Martin was President of Lion Precision from 1986 until his retirement in 2017. During his thirty years at Lion Precision, product lines, using familiar technology, were developed and introduced into new markets in unfamiliar industries. At the same time, existing product lines, which served slow growth/shrinking industries, were sold, and new products were developed using new technologies that aligned with current markets.

While at Lion Precision, export markets were developed to become more than half the total company revenue. The company continues to provide dynamic spindle error analyzers as well as sensors using capacitive and eddy current technology.

Don has served three 3-year terms on the ASPE Board of Directors. He was President of the ASPE in 2000, and then served as Chair of the Nominating committee in 2009 and 2016. He was co-chair of the ASPE Topical Meetings on Precision Bearings and Spindles in 2001 & 2007. Don was a Council member in the European Society for Precision Engineering & Nanotechnology (euspen) from 2004 to 2007, and Board Member of The Minnesota Precision Manufacturers Association (MPMA) from 1996 to 1998. Don holds a BS in Electrical Engineering from Iowa State University.

In October 1997, Len became founding President & CEO of Moore Nanotechnology Systems, LLC in Swanzey, New Hampshire. The company is a world leader in the supply of advanced machine tools and processes to produce complex optical components and has remained one of New Hampshire’s top 100 private companies since 2010.  The company was also named NH Company of the Year in 2008.

Len is a charter member of ASPE and has served two 3-year terms on its Board of Directors, most recently as President of the society in 2017. In 2017 he received the NH Business Excellence Award for small group manufacturing, and in 2018 was a New England semifinalist in Ernst & Young’s nationwide competition for Entrepreneur of the Year.

Len retired from Nanotech in January 2019 and was awarded an Honorary Doctor of Science Degree from Keene State College (his alma mater) in May 2019 for his contributions in the field of precision manufacturing systems and processes, as well as his leadership, business acumen, technical expertise, and dedication to workforce development.